I never really got into more details about amps. Guitar amps to be precise.
I made a few attempts on some small wattage examples like the noisy cricket. But never really finished them to a working product.
After some work on our house last year I moved my desk and all the suff around it to another room.
Better space.. however… Less storage surface sort of say. So my normal guitar amp (Line 6 spider 3 2×75) is basiclly to large to have standing next to be.
And besides that when I want to play something in the living room.. lets say it bulky and heavy..

So time to create a no nonsense amp to go… Well the idea was good but now building it.
As with most of my projects I just start with the thing in my hands at the moment I had that.. ” Hmmm this could be a.. ” moment.

And in this case it was in the garden.. Cleaning up some old wood in the shed.. and I thought.. Hmmm, this would be a nice look for my spade.. (I made a spade guitar last year. Will make a post of it sometime) So I took the board.. Took a saw… made four board.. and glued them together.. and yesss… it looks like a old wooden frame.. hahaha so nothing special this far 😛 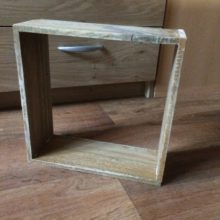 But.. it has potential..
So time for the next step.. Do I actually have a speaker which works for this size of frame.

I basiclly looked around to see if I had anything with a bit of power and if possible with no costs.
Unfortunatly, my own collection of speakers are more to be used in my arduino projects.
They are all small and do not have any form of proper sound. Good for a robot.. Not an amp. 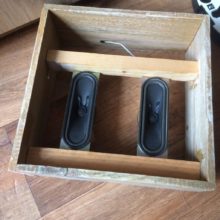 Then I noticed our old TV set which was ready disposed off..
And I remembered that I actually had some proper sound to it. So I took it apart and removed the speakers.
And like if they were made for the project…

As you can see I’ve glued in two short beams to support the speakers.
I used the both of them just due to the fact I have them. If needed I can always remove one later one. 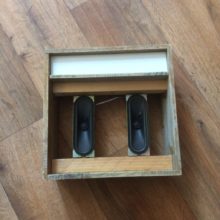 So the next step is to create a front plate. For this I used a piece of L shaped pcv. It actually was a really close fit which was quite a surprise of a build done by eye without any ruler.

Then the frontplate design.. This was actually harder than I orginally anticipated.
The raw sketches look great but not real feel with the placement once the holes were drilled.

So back to the drawingboard… So till next time 😉