This project is one of the archives sort of say.
I’ve started with it about three years ago and it took me about a year to finalize and complete.. Of course all was done in between the daily hectics so yes… it took some time 😛 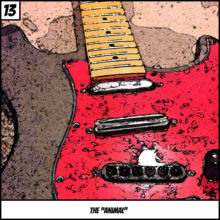 “the Animal” was a cheap stratocaster which could be bought at the kijkshop, a famous shop in the Netherlands.
The guitar was sold together with some of the basic needs like strings, picks, strap and don’t forget the crappy amp.
One of my best friends had one and years later my oldest son bought the same one to start playing. However that didn’t lasted long. so in the end the guitar was sitting in a corner with bit chipped off, missing tuning pegs and so on.
So I decided to do something about it 😉

I started out thinking how I could make a really crappy guitar at least look nice. Maybe change it in such a way that it really didn’t matter if the guitar was good or not. So… a steam punk idea was born.

I made a small design an just more or less taped it to the guitar just to see how it would look. Within my head I really had the most fantastic idea’s. But changing that into something on the guitar didn’t work out. I really could not get a grip of the basic feel of the the whole theme. Rather disappionted I then started to give it another shot. This time however back to basics and just repaint and maybe replace some of the damaged parts. However as I still liked the steampunk idea I tried some designs using painted gears. As you can see below I tested it with both the new designs as the steampunk idea.

As you can see I have made multiple designs in different colors. Just to see which one would “pop” the most. In the end the choice was made to go for the orange one. The idea was to give it a nice bright orange metallic color. So the hunt for the paint was one. But….. it really hard to find orange metallic paint. And after really searching for months it was a no go. So yet another pitfall in the project. So the next attempt was to make the other way around.
The base color would be blank and I would make orange racing stripes. But again not orange metallic paint. But as now the amount of paint I needed was very limited I decided to use my miniature paints and take orange and some blank metallic medium and use that. Well the idea was ok.. But it turned out more yellow then orange due to the white metallics.

Argh… Non of my idea’s would work out the way I wanted to. So I just decided to take a black metallic base coat and at least make it look nice overall.
So back to sanding and painting. And I must say I liked the overall way it turned out. Due to my own mistake I used the clear spray paint wrong. To much, to cold and so on.
But in the end the result was a more of a matte look on the over guitar. together with the small metallics it looked awesome.

So I put everything back together and yes.. this looks good. But… all the dull chrome and the matte black pickguard were just taking it down. So time for the second step by replacing some of the old parts.

But.. I’m used the the “heavy” sound of my other guitars which are all humbuckers. And this was just not sounding good on my normal pedal chain. So I started to look for alternatives. At that moment in time I did not had the tools to trace new caveties to put a bridge humbucker in the guitar. That resulted in only being able to upgrade to yes… other single coils. So the idea of my Frankocaster was born. I got a neck element from a Tele, muddy as hell but great for some of the more country related sounds. A hot rail in the middle position for some nice rich clean tones. And of course a high gain invader single coil pickup. I must admit I really like that last one. Is really kicks ass.
I then, based upon an idea of my nephew, i decided to give the beast a nice bright red shelled pickguard. And damn… That looked good.
I updated the wiring and replace all chrome hardware with black. Then decided the give it a bit more doom by adding a bass switch, and while I was at it I also added a 7 way switch to be able to isolate the pickups with a normal 5 way switch.

All and all I really like the visual outcome of the guitar. The updates on the hardware and pickups really made this 100 euro guitar set a nice guitar to play with.
Still has some minor issues with the intonation which could be solved with some patience… but other then that… ROCK ON !!!

One thought on ““the Animal””