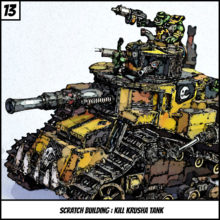 I’ve been working hard on getting the first parts in place.
Last week I’ve put some effort in aligning the tracks on the original model and checking if it all would fit without altering it to much. For now it looks like it will fit. But I have not received the final motors I’ll use so the current setup is done based upon some wheels I took from my linetracker.

Besides that I have a powerbar working to feed the tank itself. Initially I was working on an LDO to be able to directly drive the tank but came to the conclusion that reusing the main board of the powerbar and feed it directly to the Vin of the controller and the 5v to the motors works the best. And the battery is rather slime so it should fit in the thicker bottom of the model.
I needed to extend the bottom to be able to fit the motors and keep the tracks aligned with the base.

For the driving of the motors I, for now, used a simple transistor motor driver. My initial attempt failed as I misplaced the parts and as a result I got the power of the controlling pin instead of the main power. but after two days of puzzling I found the issue and now it is working.
I’m controlling it all using a app on my phone called Blynk. It uses a wifi connection to the tank to control the wheels, and basiclly everything 😀

And after I got that working it was time for the special effects. I first started with the smoke for the engine. The goal is to have smoke coming out of the exhaust when the tank is driving. So some more pressure on it while it is starting and small puffs when it’s just running. I used the same motor controller as for the wheels to drive a 3v vacuum pump which extracts smoke from an e cigarette. This was the cheapest solution.. and smallest. I need to look for the details of so called H bridges now to ensure the motors can be driven into two directions instead of the current forward only and of course work on controlling the speed of the motor. Now it’s just on… or off.

Overall I was please to get it to work so far. The base I have created now is more than enough to get the tank running. But of course I want to have the details there also.
For the prototype, created to test the wifi connectivity, i used a small box from my tools rack in the shed. They are very cheap and I had several lying around.. I’ve added some pictures below and don’t forget to have a look at the video for a very short prototype demo..

Thanks for reading.. And I’ll keep you updated