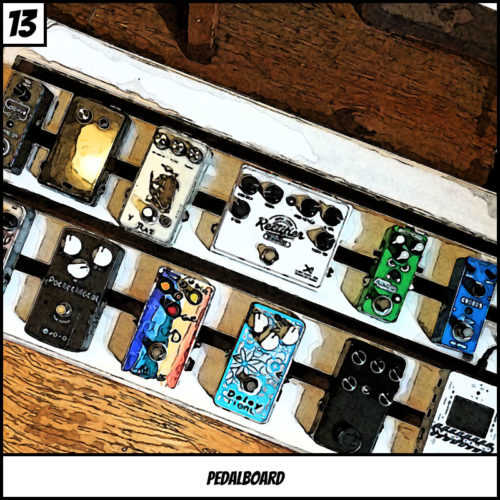 When I started out playing guitar and some point in time I wanted more.. As I had no idea where to start and I was able to get a nice deal on a multiFX pedal I started out with a Digitech floorboard. As I’m mainly playing metal like music (keeps your head clear) I found out that the board I had was not sufficient. It just didn’t had a bite sort of say. So I started to look further. And as a lot of beginner guitarists do you end up with a line 6 pedalboard. And yes.. this was much better. Not the best and it didn’t had that feeling but at the other hand I also did not had a good amp to play through so for home playing hooked up to a computer this was great.

But then I made a delay pedal with my father in law. And yes a fever was starting and a new hobby was born.
By now it been a few years since that first pedal and I have build around 30 pedals so far. The lot are simple distortions or overdrives but never the less there are some nice ones between them.
So I bought several cables and a tuner which included also a power supply. And I just started to hook everything up and yes… much better..
No that I have build the best pedals in the world but it was a fun exercise and I could finalled chain up everything I had build.

But then.. I have kids… and that basiclly means that I had to put everything back in the closet again after playing because otherwise someone would everntually trip over any of the dozens of wires laying around on the ground.

So time for something better. And the idea of a pedalboard was born.

So what I did was just got a few pieces of wood from the shed, which were just laying around and measured them to see if it would work.
As you can see in the first pictures I made a very small one. Just to see if my thoughts were actually making sense.
It was made in only half an hour and glued together with wood glue. But the idea was born.
I took more wood and started to make something bigger. No fancy plan or whatever.. Just get them see how much room I had under the closet were it would be placed and started.
One of the main goals was to make sure it had is own power supply. So in the end I disassembled the original power supply from the tuner which was 18v and connected it to a normal computer cable with a switch from a cord extender in between. And yes it was slowly getting shape.

As the lot was done based upon how it looks instead of actual measuring the lot was not visually appealing. I tried to put in a lot of filler and stuff but in the end after the first spray paint attempt I noticed it… well… looked like shit.
So I’ve decided to take some heat vinyl with some carbon look. (it was on sale in a local store). and yesssss…. much better.
The total size allows to place around 8 to 15 pedals on the board and all is stuck together using velcro.
I’m currently awaiting new stock as I ran out adding the first slot. So I was not able to finish it yet. But I think it shouldn’t take to much additional time to finish it.
I also ordered some les paul jack plates for the in and output. Once I have it all it’s just about half an hour and it should be ready to go.

I’ll let you know when it’s ready. For now some of the pictures from during the build.