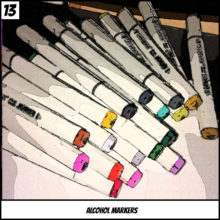 Recently I was trying to find a solution to give the paint on one of my other projects a bit more of a punch. While looking for that I found some metallic alcohol markers and I decided to buy a set. While using it at that point in time for so called weathering of a self build model I noticed that they work pretty pleasant.
So next morning I went back to the same store to see if they had any other usefull colors to try.. But no… Sold out 🙁
The a week later I noticed they had two complete sets available. And by now I had seen the stories online on how fast they were sold out due to their pricing.
So I decided to buy both sets. And I went home with 48 markers, and two coloring books for adults with all sorts of diffent styles drawings.. Think in the range of abstract art, flowers, hand drawn twirls and so on. So with that many styles and I believe somewhere in the range of 70 pages I thought to have enough practice material to find out if I like it. And at the end of the road all combined only costed me about 20 euros.
And yes… I like them.. I really need to shape up my drawing and painting skills but I can see the potential. The main issue is the paper you are using. And I have not found one I like yet. For now I mainly use the color books I bought and the back of cheap glossy photopaper. They both bleed, but in the end it is usable.

In the near future I try to practice.. practice.. and practice. In the end I want to be able to color up sketches I’m making for everything I do and I really would like to maken my own textures for a cartoon game asset set I’m trying to make for my daughter. I’ll post something on that later on, as that is a complete different ballgame. But back to the markers. I’ll write an update when I have a bit more feeling on them. Till now see some of my first attempts in learning how to use them 😉